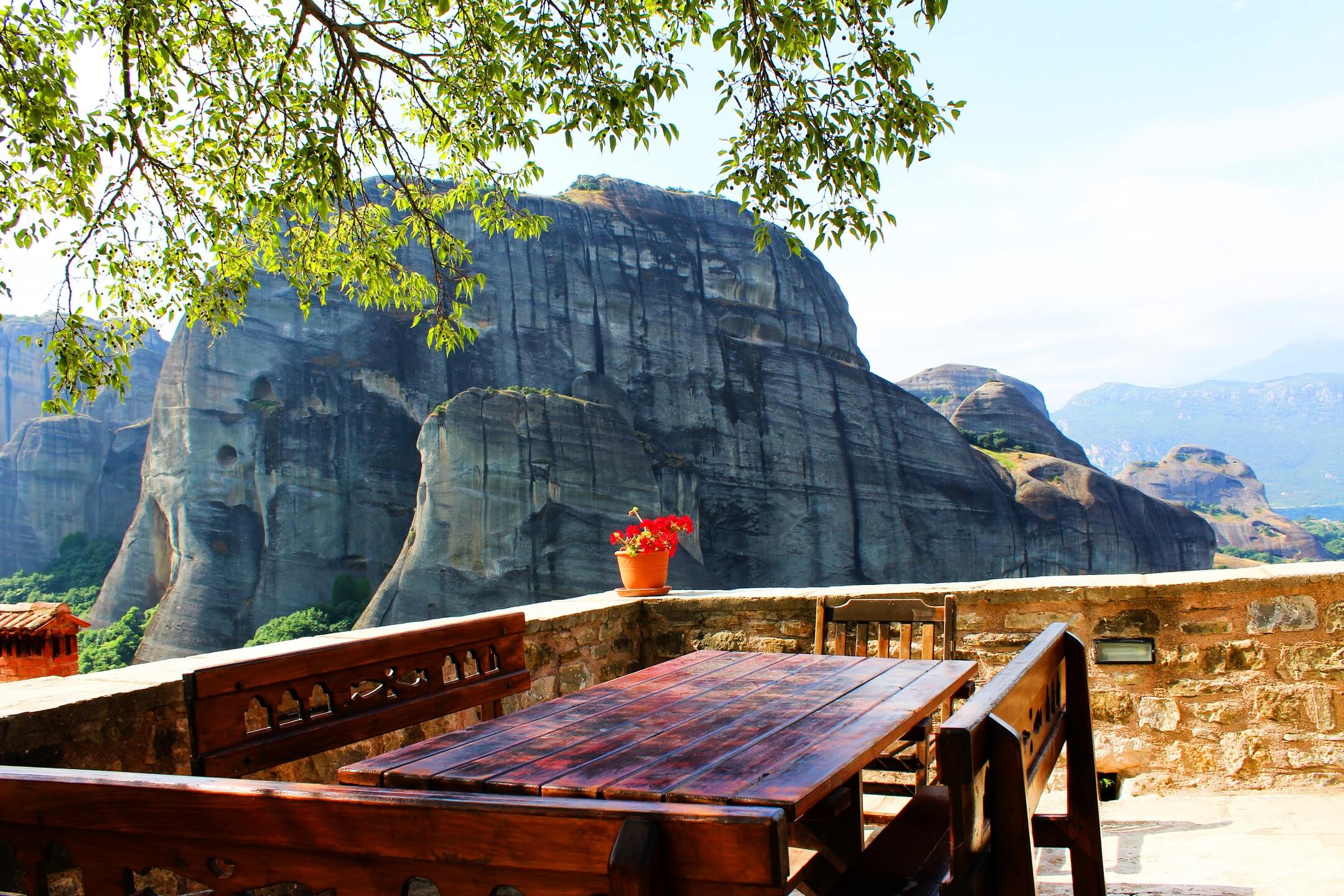 While traveling through Greece I stumbled upon Kalambaka, a place that is now slowly becoming more popular – attracting busloads of tourists. However, there are plenty of hidden gems in the area that are not flocked by groups of tourists – as the buses do not come there. The area is absolutely gorgeous and offers amazing and unique views – it’s tricky to capture her beauty with pictures. Whenever you travel to Greece, make sure to take a day trip to Kalambaka. Kalambaka is connected by rail with Thessaloniki and Athens, and with multiple trains per day you can enjoy the monasteries, the stunning geographic area and the adventureous trip to their fullest!

With a delay of roughly 50 minutes (very common in Greece) I arrived very late in the evening in Thessaloniki, coming from Sofia – the capital of Bulgaria. Thessaloniki is a well known cultural destination in Greece – and it’s a perfect destination for a small vacation or citytrip. I however had other plans, as my next train would be leaving at 5:15 AM the next morning.“

From the train station it was a 20 minute walk to the hostel, where I was staying solely for a couple hours of sleep. I informed my room-mate (who had locked the door from the inside.. your fault that I woke you up!) that I would be leaving at 4:30 AM, but that I would try to be as quiet as possible. Fortunately for him, and for me I learned later, I had already packed everything in advance. The only thing that I needed to do: wake up at 4:30 AM.

I glance down on my mobile: 04:52 AM. I do not know how, and I also do not know why, but I missed 2 (!) alarm clocks that were supposed to go off at 4:30 AM. It took me nearly a full minute before I realized that I had overslept. Ánd that my train would leave in 21 minutes. If I would miss that train I would arrive in Kalambaka 4 hours later! My best guess is that the alarm clock was already going off for 22 minutes straight before it was finally able to reach my brain. My jeans, shirt and shoes were already strategically laid out (pre-packing in advance), so within 5 minutes I was ready and had checked out.

I had exactly 13 minutes left, while it was at least a 20 minute walk. So yes – I was running through the streets of Thessaloniki, at 5 in the morning, with a huge and heavy backpack on my back. After 11 minutes of intense running I arrived at the train station. I had already made my reservation the day before (very clever Koen, thanks), so long story short: I made it with only 1 minute to spare.

Even better than the pictures.

Rather than staying in Thessaloniki I had decided to visit Kalambaka, a city near Meteora. That area is famous for the many monesteries that have been build within/on top of the odd-shaped rocks. The area is scattered with them. I think, but I obviously haven’t seen everything (I did see a lot though), that this is by far the most beautiful place that you can find in Greece. I was really looking forward walking roughly 10/15 kilometres to explore the area. However, not with a heavy backpack on my back. Luckily the first hotel I walked into was willing to keep watch on my belongings.

While walking around the area, uphill – very steep – very sweaty (30 °C), I saw buses loaded with (asian) tourists. If you ever decide to visit this area, please do as I did. There’s so much more to see besides the popular monasteries (Great Meteor, Monastery of Varlaam) where all the tourists go to. In fact, the prettiest one that I have seen was nearly deserted (Monastery of St. Nicholas Anapavsa). The surrounding area is absolutely magnificent, so even if you don’t fancy visiting monasteries it’s worth the trip – believe me.

As there are only a handful of possibilities a day to reach Kalambaka from either Thessaloniki or Athens, you definitely want to go as early as possible. To enjoy Meteora for the whole day. On my way to Kalambaka I was the only one boarding the train, so I figured that on my way back to Athens I would again have a relaxing trip. Well… the train (which consisted of 7 coaches) was completely packed – in fact there was not even a seat available in first class anymore. Poor me. I think the ticket sales guy felt bad for me. Even though the train was loaded with people I was the only one with an empty 2nd class seat next to me.

It’s funny how things work out sometimes… When waking up at 4:52 AM I was convinced I would miss my train. The result would be that I would arrive at Kalambaka around mid-day. I was also convinced that I would have a relaxing ride to Athens… Which for sure was not the case… When it’s that hot.. (30°C, sunny).. people start to smell. Or maybe that’s the reason why there was a vacant seat next to me? Anyhow, Kalambaka is best visited if you do not join the buses packed with tourists.. because while hiking around, and enjoying the majestic views you will be able to admire the less-popular monasteries even better… Best of all: you will only encounter a handfull of people.

Pro tip! Have a look at ho(s)tel accomodation in Kalambaka. Affordable accomodation, with last-minute cancellation in the middle of your travel locations! Check out my booking accomodation section to save on travel costs.