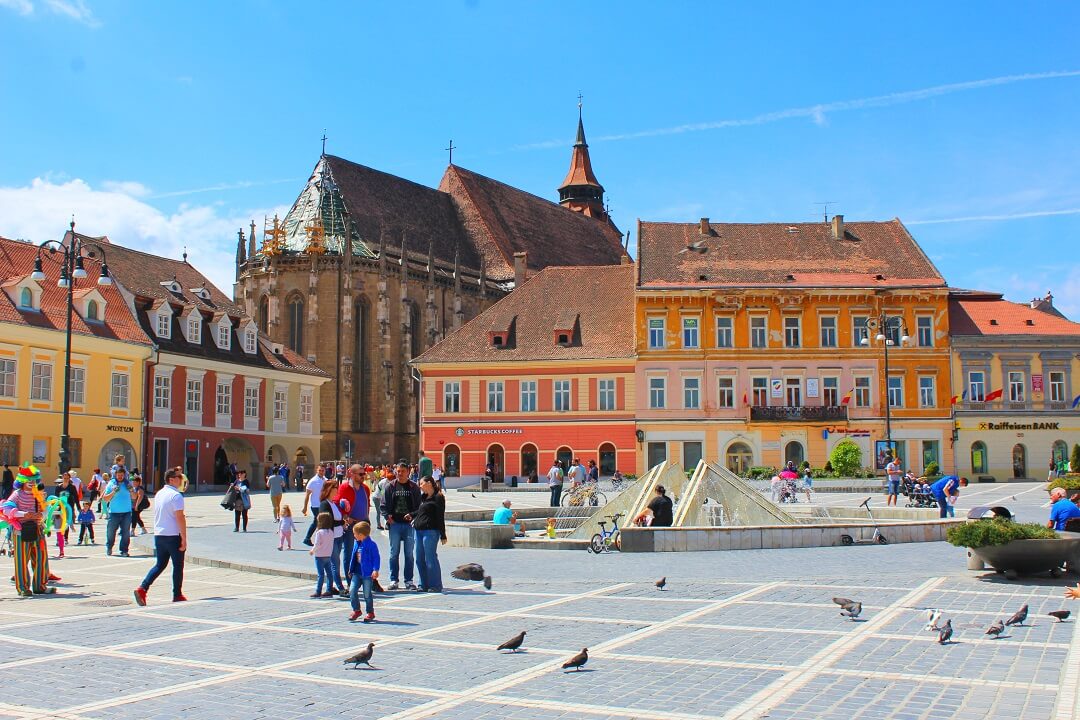 Located in transylvania; Dracula, Bran Castle, Bram Stoker. Brașov is a lovely vibrant and historical city, beloved by local Romanians for the weekends.

Brașov [braˈsjof] is located in the center of Romania, surrounded by the Southern Carpathians and is a central gateway in the Transylvania region. Originally it’s name was Corona / Kronstadt (“Crown”), named by German colonists who were given the task of building settlements and thereby stengthening the power of the Transylvania region. In the symbol of Brașov the crown can still be seen. When looking from above at the citadel of Brașov, one can – with some iminagation – see the shape of a crown. Today there are still many germanic references that can be seen in the city.

Brașov is a city that has survived numerous threats over the decades, from outside as well as from within. In 1689 a huge fire that lasted for days destroyed most of Brașov. Back then it was a settlement which was made mostly out of wood. Over 3000 people were killed by the devastating fire. One of the surviving structures is the Biserica Neagră, from which only the roof was made of wood. Biserica Neagră translates to Black Church, referring to the change of color of the structure observed after the fire. Although it is not really black it definitely has a darker shade over it. Biserica Neagră’s interior was completely destroyed due to the fire. Weirdly enough one painting survived the flames.

Brașov is a vibrant city, beloved by Romanians who come here to enjoy time off. Brașov is surrounded by mountains. That makes it a perfect starting point for hiking during the summer and skiing during winter time. Brașov is also the historical gateway (the intersection of trade routes during the Ottoman Empire) to all other regions of Romania. Any one likes Vampires? If yes, you have probably heard of Bram Stoker – the writer that “invented” (or not… that’s up to you) the character ‘Dracula’.

The perfect starting-point for exploring Transylvania

Closely located to Brașov is Bran Castle. Commonly known as “Dracula’s Castle”. It is unknown whether Bram Stoker referred in his books to this castle. However, the city of Bran is more than happy to go with the tale. Brașov is a very nice little get-away and is definitely worth spending some time. Fun activities to do include visiting the Biserica Neagră and to join a free walking tour. Also do take a bus to the Bran Castle. Do a day trip to Sinaia or Sighisoara. And hike to the fortress! Once you’ve done all that be sure to have a drink on the Piata Sfatului. Finish it with local food such as polenta and bean-soup.

There is a lot more to discover in the Transylvania region as well, such as the areas of Sibiu and Cluj. While roaming through the Transylvania area, if you are lucky enough, you might stumble upon a castle keeper that’s more than happy to let you enter an abondoned castle. On your own. Be aware of bats. You know who, or what, is associated with bats. Dracula.

Pro tip! Have a look at ho(s)tel accomodation in Brasov. Affordable accomodation, with last-minute cancellation in the middle of your travel locations! Check out my booking accomodation section to save on travel costs.